Migrants shouldn’t feel like the beneficiaries of handouts, but should be empowered to participate fully in society. This is according to Marcus König, mayor of Nuremberg, who launched the Integrating Cities Conference IX, where hundreds of cities and stakeholders gathered to discuss migration and integration at local and EU level. König pointed to the potential profitability of migration, both socially and economically, in our cities, but warned that this potential cannot be effectively exploited until equal opportunities are available for all.

This is why Nuremberg has signed the Integrating Cities Charter, a pledge to manage integration effectively for the mutual benefit of migrants and receiving societies. The charter, according to Eurocities Secretary General Anna Lisa Boni, who also welcomed those attending the conference, is a tool for insight and action that cities can use for effective integration. Such action on local level is necessary as, while migration is a global phenomenon, “integration happens at local level.”

The charter and the whole Integrating Cities process are prescient in this sense, as the vital role of cities has just received a major boost in the EU migration agenda: The recently published EU Action Plan for Migration and Integration recognises the key role of cities and provides a basis for local, national and European cooperation and co-governance.

The European Commission was keen to emphasise the centrality of local action for effective integration across Europe: “All integration is local,” said Commissioner Johansson in her keynote speech, “People don’t integrate into nations; they integrate into communities.” Despite the great work occurring at local level, Johansson warned against complacency, reminding us that we still live in a climate where “too many people equate being European with being white.”

Concerted action needs to continue at local level to address racism and anti-migrant narratives. Changing narratives around migration is key for VALUES, the EU-funded project under this year’s Integrating Cities Conference was held, as well as CONNECTION, Eurocities’ latest migration and integration project.

The key role of cities in integration is recognised not only at European, but also at national level, and Annette Widmann-Mauz, German minister of state for migration refugees and integration, did not mince words when she declared that “cities are the beating heart of integration.” Widmann-Mauz also celebrated the EU’s new action plan, especially the emphasis it places on the role of cities and the explicit pledge to lend cities further support from the European level.

In particular, Widmann-Mauz looked to emphasise the important role that volunteering can play in integration, at once empowering migrants to engage with their new communities, and providing a great wellspring of energy for addressing migrants’ needs. This spoke to the theme of this year’s conference, “cities and volunteers building an inclusive society,” which is inspired by the volunteering focus of our VALUES project.

Of course, it’s all very well to say that the European level needs to work more effectively with cities, but how can this ambition become a reality? This was the question of the conference’s first panel debate, welcoming Member of the European Parliament Damien Carême; Asher Craig, deputy mayor of Bristol; Johannes Luchner, deputy director general of the European Commission’s DG Migration and Home Affairs; and Nuremberg councillor Elisabeth Ries.

Fleshing out the Commission’s perspective, Luchner hailed the work being done through EU-funded projects such as VALUES to bring together cities, migrants and civil society. He called for more “responsibility and solidarity among member states,” and highlighted the necessity of giving further support to cities not just to run programmes but to engage communities in the design of bottom up action.

He held up the great contribution that migrants can make, including their positive fiscal impact, when the right measures are applied in a timely fashion. The EU’s Asylum, Migration and Integration Fund is a force for achieving this local ambition, and to help cities exchange knowledge across Europe. We should bear in mind, he said, that a lot of Europe’s front line medical workers are migrants, and that the narrative around migration must change.

Carême, from his vantage point in the European Parliament, recalled his experience as mayor of Grande-Synthe in France, pointing to the great need for more means to be provided to cities to spur integration. The importance of building and sharing experience through networks was particularly relevant from his point of view.

He said that the European Parliament needs to work in closer cooperation with local authorities, who are best placed to integrate migrants, and called for a future in which nobody, whether migrant or local, would have to spend even one night on the streets.

MANY CITIES, MANY VOICES

In Bristol, according to Craig, cooperation is key. Bristol’s one-city approach engages a wide swathe of partners and agencies, with the city council providing a core infrastructure for partners to work together. But this partnership, Craig said, should not be limited to one city – cities must continue to work in partnership and in collaboration with the European level if true progress is to be made, and such collaboration will continue in Bristol, regardless of Brexit.

The role of the mayor, Craig emphasised, can be very influential as an advocate for integration who inspires other stakeholders. Further, integration is not a process that should pick and choose to whom it applies – support needs to come to migrants regardless of their immigration status.

The city uses an Equality Charter with hundreds of signatories to encourage people to embrace difference, and is even working with newspapers to encourage them to stop using denigrating language in reference to migrants and refugees.

“We’re not afraid of being the city that we want to be!” #Bristol‘s @CllrAsherCraig on the #history commission set up by #mayor @MarvinJRees changing narratives around #UK #migration and #BlackLivesMatter. Watch our #IntegratingCities conference live 👉 https://t.co/v8wogpxVlJ pic.twitter.com/YYoLw0qv6u

Like Bristol, Nuremberg is a very diverse city and, according to Ries, this diversity among the long-term residents is a great strength because it means that they are more open to the cultures of newcomers. Easing integration, said Ries, is not just about your policies but also about the framing of these policies – it is essential that services are not seen as a zero-sum game, but rather existing for the mutual benefit all people.

Dialogue, Ries declared, is the solution, both between different levels of government, between cities and the EU and between citizens and newcomers. What should be held in the centre of people’s minds is that social problems are not with categories of people but with issues like poverty, education and housing.

You can watch the full exchange:

Gabriele Rabaiotti, a councillor from Milan, kicked-off the final day of the conference with a presentation of the forth Integrating Cities Report, a direct insight into how cities are integrating migrants today. Youth at thee core here, as it is young people, said Rabaiotti, that are moving between cities, and young people that are capable of building those cities anew.

Universality is also key, with services needing to be provided indiscriminately, regardless of whether people have a migrant background or not. Volunteering also came up as a strong force which is engaging youth, migrant and non-migrant, all across Europe.

“People need to feel free to feel at home anywhere they are.” Gabriele Rabaiotti of @ComuneMI emphasises the importance the #IntegratingCities Charter and EU-funded projects like VALUES, live now at https://t.co/v8wogpxVlJ @EUROCITIES @migrationwork @VolunteeringCEV pic.twitter.com/NV7Cm4i7XH

How a multi-stakeholder approach can be used by cities to ensure inclusive and equality driven integration strategies was the question of the final panel debate. Given its field of inquiry, this panel hosted experts from a range of backgrounds: Gabriella Civico, director of the Centre for European Volunteering, a VALUES project partner; Adem Kumcu, president of the New European Business Federation; Carmelina Labruzzo, Cesena councillor; Anila Noor, member of the European Commission’s expert group on the views of migrants; and Ritva Viljanen, mayor of Vantaa.

Viljanen stressed the success that Vantaa has seen through cooperation programmes between business and civil society. At present, the city is struggling with a particularly high percentage of COVID-19 infections amongst the migrant community, and is working through direct contact with locals and migrant communities to lend assistance and distribute masks.

Cities, Viljanen said, are the administrations that must face the consequences when integration is not successful, and therefore must ensure that integration is a regular part of everyday life. That is why Vantaa is focusing on guidance and language training to ensure equal opportunities for all.

Cesena, too, is working to include both migrants and citizens, said Labruzzo, building a movement through which all can embrace a shared identity. In this regard, the city is proud to have been a signatory of the Integrating Cities Charter, which is helping to achieve broad integration goals.

By mapping its migrant population, the Cesena hopes to increase the effectiveness of its active and forthcoming policies. Noor seconded the widely felt sentiment that it is essential to disrupt narratives of ‘us’ versus ‘them’, rather focusing on a future of equality that is built with migrant engagement in a process of listening and exchange.

Kumcu referred to this necessity as a ‘paradigm shift’, with a focus on the dividend of diversity. From a business perspective, he saw the role of the city government as taking a lead in building economic, social and cultural ecosystems of inclusion that disrupt ‘old-boys networks’ and hold up the migrant entrepreneur as a role model and change maker. Through programmes like coaching networks for newcomers, and with a focus on aspects like gender quality, he insisted that integration and diversity would not only be possible but lead to a flourishing in our cities.

“We need to shift the paradigm towards the dividends of diversity. Migrant entrepreneurs are community leaders, they are bridge builders, they are change makers,” business leader Adem Kumcu of @UNITEE_Europe live now at https://t.co/v8wogpxVlJ #IntegratingCities pic.twitter.com/EyQJD1Z4IM

Civico agreed positive ecosystems were essential, and emphasised that volunteers and volunteer networks offered a balance that could both support and engage migrants and bring new vigor to local communities. Volunteering can allow migrants to further develop their skills, and can strengthen society with international expertise. She stressed however the importance of not replacing paid jobs with volunteer positions.

For Thomas Fabian, deputy mayor of Leipzig, who rounded up the conference, the main messages were clear: Cities need to cooperate with migrants and migrant organisations, setting up a dialogue rather than a one-way system. With the knowledge gained thereby, new perspectives can emerge which, whether through volunteering or new policy procedures, bring stakeholders together to find effective solutions.

Through long-standing relations and trust across education, the labour market, health and politics, cities will succeed. After all, he said, cities are and have always been “the machine rooms of integration.”

The full video of day two is available: 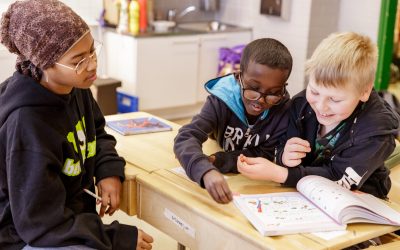