NO ONE HAS NO SKILLS – SHEFFIELD WELCOMES VALUES


“He came, he was so isolated. He had anxiety; he was so stressed. He was an asylum seeker. He was lost, he didn’t think he could do anything.” Moses Lutakome describes his meeting with a migrant who became involved with Sheffield’s New Beginnings project. This project puts third country nationals who have recently arrived in Sheffield together with organisations that are seeking volunteers.

“New Beginnings Project actually has a way of getting new migrants actively involved in volunteering on a one to one basis. So people that come along can be matched to something that they want to do so that they can offer their skills. It’s about their personal skills as well and getting that confidence back.” Explains Angela Greenwood, Community Services Manager of Sheffield City Council.

According to Moses, people often arrive feeling as though they have nothing to contribute to their society. Moses, however, is quick to contradict them. If someone is a mother, he tells them “You have a skill: you care. That’s something for you in each and every environment you are in.” If someone was a shepherd, he tells them that means “you are organised, you know how to look after a flock.” During a visit to Sheffield organised as part of VALUES, a EUROCITIES project on migrant integration, we met with Moses and the ‘anxious’ and ‘stressed’ migrant that he had described to us. The man was unrecognisable. As Moses confirmed, “He’s boosted his confidence. When you see him, he’s a different person.” 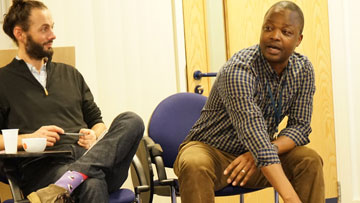 The path of volunteering empowered this man, who has now, as well as his regular voluntary work, set up a migrant football team which trains weekly. “He’s running that on his own.” Moses says proudly, “We helped at the beginning, we showed him what to do; he took it on.” That is how New Beginnings works: new recruits have a long interview where they work together with the centre’s employees to identify skills and interests they have that they could put to use in a volunteering context. The New Beginnings team match them with a suitable organisation, and then check up with them and the organisation every three months to make sure things are going well and address any concerns that have arisen. 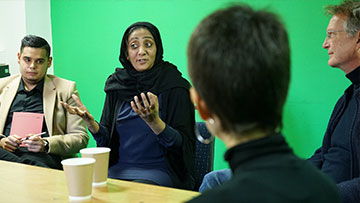 THE VALUE OF WORK

Finding work can be difficult for newly arrived migrants. For those seeking asylum, it can even be illegal. A few weeks or months off work may sound appealing to some of us, but settling into a new context, work is an important way to meet people, and to feel as if you are living a meaningful existence. That is where volunteering comes in. For those not allowed to work and those who have not yet found work, volunteering is an opportunity to build up skills, plump-up your résumé, and become part of a new community.

“I’ve seen so many good examples where people are coming from nowhere and they’re really feeling a bit lost.” Says Angela, “Then they come along and get good opportunities in volunteering which brings their confidence back but also helps them develop the next stages as well.” Though she is quick to point out that migrants are obviously not the only beneficiaries of this exchange, which “also helps those organisations, because they’ve got some practical tasks that need doing.”

This doesn’t mean that volunteering should be seen by companies as a substitute for paid work – rather, they give non-profit organisations the opportunity to enhance their services. In fact, at the beginning, taking on volunteers from vulnerable groups can put a strain on an organisation as it often requires training and supervision by other staff. However, this all pays off when those organisations see their volunteers begin to flourish, and the path from volunteer to employee to leader within one social enterprise is not an uncommon one.

WORKING WITH THE CITY

Sheffield is bursting with voluntary organisations, but Angela makes no secret of the fact that the city is no longer able to offer the kind of financial support that it once did: “The budget cuts at Sheffield City Council has seen have been horrendous.” Sheffield City Hall has even brought to a halt the old tradition of adding a new gold link to the mayoral chain for each new mayor who is elected. “We didn’t think it was right,” said Lord Mayor Tony Downing, “to be buying gold when we need money to pay for essential services.”

Though the city does still give out grant aid to help valuable work continue, it has also found other ways to ensure that the voluntary sector can thrive. This can take the form of providing free space for organisations to meet and work, to putting people running complimentary activities in touch with each other, to keeping organisations abreast of other opportunities that may be open to them.

Sheffield is just one of many cities working with migrant volunteers to create social value. As a result of its work in VALUES, the city is now investigating how it could broaden its focus beyond refugees and asylum seekers, currently the main target of its action, to offer more support to other migrant groups. For more examples from cities all over Europe, take a look at the latest newsfrom our VALUES project.

There are plenty of ways that cities are working with migrants and local communities to promote integration, but the appealing part of using volunteering for social inclusion among migrants is that instead of offering them a helping hand, it empowers them to be the motor of their own integration. Working in volunteer roles is a great way to meet people and make new friends, to learn the local language, and to develop skills that will stand to you throughout your life.

As many of the leaders in these volunteer organisations are migrants who began as volunteers and have now carved out a place for themselves in a new community, the voluntary sector is also a place where newly arrived migrants can see role models who have succeeded in bridging the gap.

Volunteering also helps to provide a counternarrative to the anti-immigration rhetoric that is sweeping over Europe. It is hard for people to deny the goodwill and desire of migrants to contribute to, rather than ‘scrounge off’ their new countries, when they are stepping up by the hundreds to help out in any way that they can.

“Is it always perfect? No. It’s always hard.” Moses says. And he should know: Moses himself arrived in the UK as a migrant, started volunteering, and now occupies a leadership role within the New Beginnings Project. We should beware of idealising volunteering as a frictionless solution to integration. But just because something is a struggle, doesn’t mean you give up. 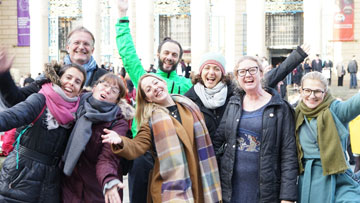 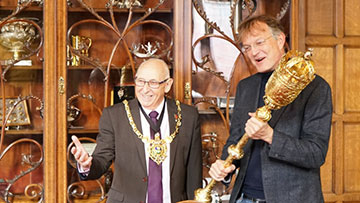